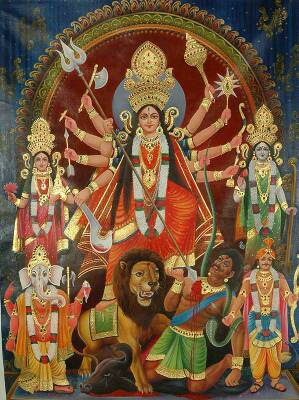 Today, I offered five repetitions of the Prapannarti mantra and Kali Sahasranama in context of my puja, and celebrate the second night of the nine-night festival, Navratri.

Why is it nine nights? I meditated upon this, and here are my feelings.

It is nine nights because it calls us to perfection. Nine is a perfect number. All multiples of nine comes back to nine. 9x3=27 2+7=9, 9x5=45 4+5=9, 9x12=108 1+0+8=9, ad infinitum. It is no mistake that Durga emanates nine times, as Navadurga. Devi manifests eight more times as the Matrikas in Chandi, totalling nine, whom emanate to the 64 Yoginis, a multiple of nine, or as 81 in some traditions. Kali (or Sri, depending on tantrik kula) manifests nine more times, and including Herself, makes the Dasamahavidyas. Then there are Navagrahas and I could go on, but the central nature of nine is paramount in importance because it is that call to perfection.

Navratri seeks to perfect us collectively. The ugra expression of Devi as Chandi/Durga facilitates that ability in us as we experience Her through each night. When She slayed Mahiasura, it was said that, because he was killed by Her weapon, He was able to go to Her loka. If the incarnation of the Great Ego can transcend, what is our excuse?

We just have to surrender our egos. Sometimes this means we have to encounter Devi head-on and get pierced by Her trishula for it to happen. The best Mother will hold your hand through life's challenges, but She will slap it when you misbehave, too. And, if that still does not get your attention, She will pierce your heart at Her feet.

In Navratri, our egos identify with the hoards of asuras, and near the end, we are called to surrender as the story comes to a close. The sooner we do so, allowing our ego to be slain, the sooner we reach perfection, atma-jnana, and moksha.

Published with Blogger-droid v1.6.8
Posted by Sangraal at 8:33 PM 4 comments: